My son got sick over the weekend. With Corona virus being in the headlines constantly, even my son's flu symptoms prompted a thorough spring cleaning.

I took the bathrooms and upstairs while my husband tackled the laundry room and kitchen. He scrubbed everything down and even labeled my industrial glass jars of baking ingredients because if you don't know, I am an avid baker.

Not a professional by any means, but I bake just about everything. I purchase my ingredients where restaurant owners buy their foods in bulk because I really go through a 25lb bag of flour and 15 dozen eggs in a busy month.

The most coveted ingredient is butter.

I am a butter snob. I am stingy with my good butters, and when it's on sale I stock up the way boomers stock up on bottled water during epidemics that simply require washing their hands because tap water is for peasants (and millennials).

I don't eat it or use it in cooking, but I seldom bake a cake without it. If I do, I have a butter flavoring that I add to the recipe. I also have at least six different flours that I use at any given point in time. My husband likes to watch me bake but has no idea what I'm doing most of the time.

After the Sunday purge, my husband sweetly requests a Battenburg cake. 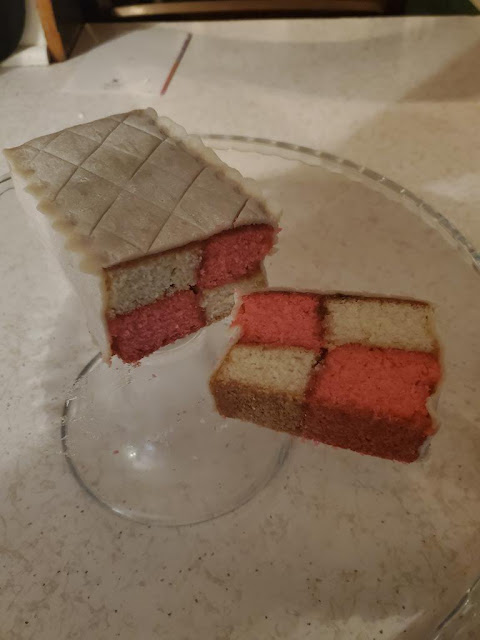 Cute right? It's a little almond or vanilla cake wrapped in an almond paste.

These cakes are pretty small, so I quickly whipped one up and dropped it in the oven.

I noticed that the top hardened into a shiny crisp top and the batter underneath was foaming. I thought it was weird, but dismissed it and went on to make the almond paste.

When working the almond paste, I noticed it came out rather wet. I figured it was due to not being precise with the ingredients and send the husband out for store-bought paste instead.

A burnt smell was billowing out of the oven. It smelled like Peeps being nuked in the microwave. The batter had erupted from the tin and was now spilling over onto a baking sheet I had underneath.

I was taken back by how my cake seemingly went nuclear. I measure in grams and I was using my good butter, dammit!

So, okay. Maybe it was because I was compensating incorrectly for self-rising flour. I tried again and once more, my pink and white cakes turned into a volcano in my oven. Something was indeed wrong. My first assumptions were that the cake gods smiting me for not practicing as of late.

It could have been a curse. It was very likely my lost mojo was the result of pissing off the wrong person. Maybe my baking powder was expired? Nope, not that.

My husband pointed out that it had been a while since I baked anything. Maybe he was right.

The next day, I baked with all my 83% fat butter and the results were the same. The batter of doom once again coated my oven. While the oven was in self-clean mode, I pondered the situation. Standard butter is 82% fat. Could that 1% really throw results? No. I use 83% all the time.

I worked my frustration out on some store-bought almond paste until it dried and cracked as if there was too much flour...almond paste has 0 flour. I decided to let it rest while covered. I was at a loss. After 5 failed cakes, failed almond paste, and store-bought paste nearly unworkable, I was now staring down an oil-based batter wondering if it really had to do with the fat content.

Feeling defeated, I sat down at my stool beside my leathery almond paste and scoured the internet for an explanation. Nothing came up when typing "explosive disaster cake" or anything similar.

I stick my finger into the white powder under the almond paste I assumed to be powdered sugar and licked it. My mouth went gluey and my suspicions were realized.

I threw my head back and laughed, my laughter was only interrupted by profuse swearing.

My husband labeled my jars before rearranging them. My best friend told me about how her husband found a box from 10 years ago labeled, "half a dead hooker." My husband labels things even if he doesn't know what they are. 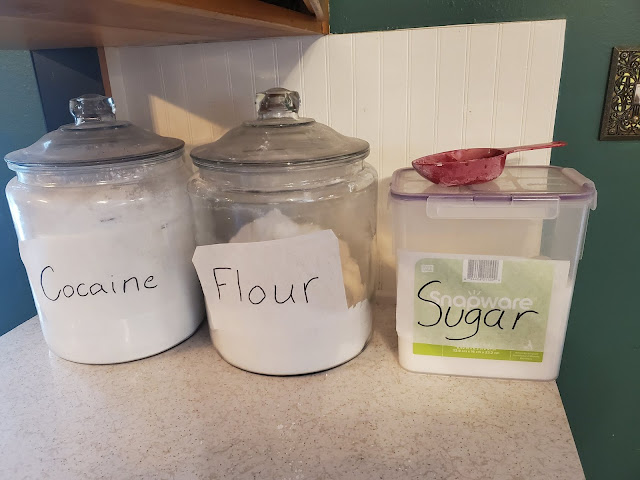 So, the Cocaine was originally my flour, my powdered sugar was labeled cocaine. All my cakes imploded in my oven like peeps because I was effectively nuking a buttery, egged powder sugar mess with enough baking soda to give that extra oomph!

RIP my good butter.
Posted by Volume at 3:08 PM No comments:

Goodreads reviews for A Soul Reclaimed